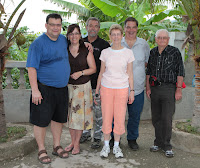 one of our teams into Haiti.... Garry & Kelly report..

WOW. What an amazing continuation of the story in Haiti. Over a year ago I was there a few weeks after the earthquake and amazed at what I saw. Lives lost, homes shattered, families obliterated and yet the people had a resolve to go on. I had never been exposed to a culture so poor in wealth before, never mind one that had experienced such devastation. I went there to help but found their resiliency and desire to rebuild and go forward encouraged me. Now after going a little more than a year later, the hearts and efforts of all the people through lifeline have made changes I wouldn't have thought possible. Little children that were starving and playing in muddy , garbage filled streets and that were dying of disease and starvation are laughing and playing in school yards and playgrounds that didn't exist before. The orphanage my wife and I stayed at had about 30 children there and I think half of them were preschool. I asked the head of the orphanage how many of them would have died had there not been intervention. He thought for a minute and replied that probably all of them except for a couple. I wish all of you that have supported this orphanage through Lifeline Haiti could see what your support has done. We talked to junior high and high school students that were just trying to survive a year ago and now are being clothed and fed and educated. Their eyes sparkle as they share their dreams of someday becoming teachers and mechanics and lawyers. It is not just life changing. It's life saving. Like Bob Davisson always says. 'changing one life at a time'. There is so much more to be done but there are also miracles being done every day as we in North America continue to change lives
Posted by APT EFFECT INC at 6:55 AM