Continuing on my series of Haiti to help you understand more about Haiti and her precious people... facts from the CIA WORLD FACTBOOK
I would encourage everyone to explore this beautiful country... make sure your connected on the ground with a mission organization....

Location:
Caribbean, western one-third of the island of Hispaniola, between the Caribbean Sea and the North Atlantic Ocean, west of the Dominican Republic
Geographic coordinates:

lies in the middle of the hurricane belt and subject to severe storms from June to October; occasional flooding and earthquakes; periodic droughts
Environment - current issues:

extensive deforestation (much of the remaining forested land is being cleared for agriculture and used as fuel); soil erosion; inadequate supplies of potable water
Environment - international agreements: 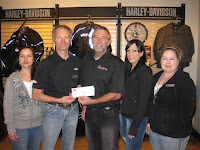 Thank you to so many have come together to help with funds need in our projects in Haiti.. over the last while we have been traveling and speaking at schools.. so many young people have been helping out.. children helping children... that is awesome.. still so much more needed but every dollar helps..
in the photo is Ivan, the owner of the Harley Davidson Shop in Medicine Hat who held a fund raiser for our Orphanage in Jacmel... thank you to Ivan and your staff for making a difference...
ONE CHILD AT A TIME...